It is appropriate that our nation should set aside a day to remember the sacrifices of all those who gave of themselves in defense of their nation to the point of giving their lives. Without such sacrifice, the republic could not be free, and out ideals of individualism, liberty, and independence could not succeed.

Yet, we must not forget those sacrifices or ideals the other days of the year. The fact that the men and women we remember today, taken from us by the violence of war or the cold hand of time, gave of themselves for the greater cause of what our nation stands for and is built upon should be seared into our minds every day, not just on Memorial Day. It is through the example of their service that we come to realize the full cost of the freedom we claim, and it is by their sacrifice that we should measure the value of our own payment toward that ideal.

And, if we find ourselves falling short of their example, then it is by their example that we can find our own way to pay the cost. This does not mean we must pay in our blood or our lives, but we must pay in a lifelong struggle to establish ourselves as individuals, exercising the liberty we have been blessed with, and standing firm in the independence that others earned and we continue to secure. It is when we do these things that we honor those who have gone before and we lay the foundation for those who will follow.

Godspeed then, brothers and sisters who have gone before. May we be found worthy to be counted among your ranks when then time comes. 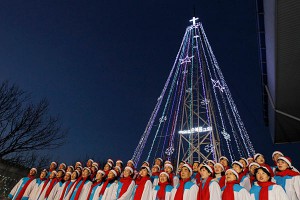 The people walking in darkness have seen a great light; on those living in the land of the shadow of death a light has dawned.

You have enlarged the nation and increased their joy; they rejoice before you as people rejoice at the harvest, as men rejoice when dividing the plunder.

For as in the day of Midian’s defeat, you have shattered the yoke that burdens them, the bar across their shoulders, the rod of their oppressor.

Every warrior’s boot used in battle and every garment rolled in blood will be destined for burning, will be fuel for the fire.

For to us a child is born, to us a son is given, and the government will be on his shoulders.

And he will be called Wonderful Counselor, Mighty God, Everlasting Father, Prince of Peace.

Of the increase of his government and peace there will be no end. He will reign on David’s throne and over his kingdom, establishing and upholding it with justice and righteousness from that time on and forever.

The zeal of the LORD Almighty will accomplish this.

For the message of the cross is foolishness to those who are perishing, but to us who are being saved it is the power of God. For it is written: “I will destroy the wisdom of the wise; the intelligence of the intelligent I will frustrate.” Where is the wise man? Where is the scholar? Where is the philosopher of this age? Has not God made foolish the wisdom of the world? For since in the wisdom of God the world through its wisdom did not know him, God was pleased through the foolishness of what was preached to save those who believe. Jews demand miraculous signs and Greeks look for wisdom, but we preach Christ crucified: a stumbling block to Jews and foolishness to Gentiles,  but to those whom God has called, both Jews and Greeks, Christ the power of God and the wisdom of God. For the foolishness of God is wiser than man’s wisdom, and the weakness of God is stronger than man’s strength.

Those are the words, among others, that people use in their celebration of Christmas. We join in a universal longing for the end of strife among ourselves, among our nations, and with our God. We celebrate peace, hope, and love because that is what the nativity story says, and we want to believe it with all of our hearts.

But there is something more to this story of a baby, born of a virgin mother, announced by angels, and laid in a manger:

You see, baby Jesus was not just any baby, he was the answer to the pressing question of how we achieve peace, hope, and love. He was the one, born into the world at just the right time, while we were yet sinners, to pay the price no human could pay since that fateful day when Adam and Eve violated God’s first covenant with them. Jesus was born in a shadow, the shadow of the cross on which he would die.

Yet even that is not the end of the story, for in the life of this man whose birth we celebrate more than 2,000 years after it happened is an even greater promise:

It is Jesus, laid in a manger at his birth and murdered on a cross in the prime of his life, who also defeated death and the power Satan exercised over us when we fell from God’s grace. It was Jesus who died the sacrificial death, finishing all that had to be finished, and who rose through the glorious power of God as the first fruits of who trust in God’s promises.

If you celebrate Christ’s Mass, it is this reality that you must face: peace, hope, and love with God , paid for with the blood of his only Son, and guaranteed to us by the grace of the Holy Spirit.

Lord Jesus, come quickly to fulfill that hope for those who believe.