Posted on 28 February 2007 by dlhitzeman 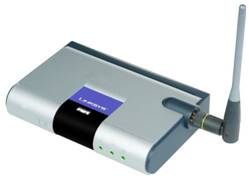 The Linksys Wireless G Music Bridge is one of the coolest electronic gadgets that I have purchased in a long time. In basic terms, the Music Bridge allows a user to transform a PC into a jukebox by connecting the PC to a home stereo system using a wireless B or G network and whatever music playing software the user already uses. It does so by redirecting the local PC audio from the PC speakers to the Music Bridge.

The Music Bridge is straightforward to set up, although I definitely recommend reading through the Userâ€™s Manual before setup and paying careful attention to the instructions for the initial Ethernet cable part of the setup. When I set my Music Bridge up originally, I did not notice that the bridge takes the first three octets of the PC Ethernet interfaceâ€™s subnet, which happened to not be the same subnet as my wireless network. The problem is, however easily corrected.

Once setup, the Music Bridge functions as advertised. Connection to the bridge is controlled through a console on the hosting PC, and the music is played using whatever media player the user wishes, in my case Windows Media Player 11.

The sound through the Music Bridge is a bit â€˜tinnyâ€™, a quality I attribute to the compression that the system has to use to transmit the audio via a networking protocol. While the control console has a built in equalizer, I have not yet found a way to completely eliminate the effect.

The Music Bridge is a little bit of a bandwidth hog, tending to cut out and skip when the network is under heavy use. In my case, I am streaming audio from a network attached storage drive to my PC and then to the Music Bridge. That setup, when combined with heavy browsing or the like, can cause the described problem.

What the Linksys Wireless G Music Bridge Does Right

The Music Bridge does exactly what Linksys said it would do – play music via a PC onto a stereo system- and well enough that I have few complaints.

What I Would Have Done Differently

Seeing as the fact that the Music Bridge functions on an embedded Linux OS, providing direct music access and play list support would not have been that hard, thereby eliminating the need for the PC in the mix. There are, granted more expensive, media bridges that have that capability, and if they limited the capability on this device to just music, they would have the perfect device.

Overall, I am very impressed with Linksys and with the latest product of theirs that I own. As a result, I give the Linksys Wireless G Music Bridge a First Look rating of 4 out of 5 and a â€˜Buy Thisâ€™ recommendation.

This entry was posted in Computers, First Look, Networking, Reviews, Science and Technology. Bookmark the permalink.