Posted on 7 September 2008 by dlhitzeman 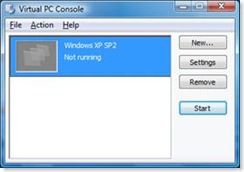 For a variety of reasons, I found myself in the need to be able to run Windows Vista (which came installed on my current laptop) and Windows XP without having to use more than one PC at the same time. Fortunately for me, Microsoft offers a rare free piece of software to do just that: Virtual PC 2007.

I have never run virtualization software before now, so I was very cautious in considering VPC. To my surprise, it does exactly what I wanted it to do. I’m not saying that the software is perfect, and since I’ve just started using it, I am sure I will discover flaws, but I currently have a version of Windows XP running as a VPC on my Windows Vista box with only a minimum degradation in the performance of the whole PC.

Some things to consider before installing VPC: First, you will need to have access to the operating system you want to run. In my case, I had a copy of XP that I could load. Second, VPC does not work 100% like a normal PC, so if you want to use it to, say, run old games, do not be disappointed if it is not up to the task. Third, I personally found the full-screen mode less useful than I had hoped (this may be a result of my own novice status), so if you intend to use your virtual system as a full PC, do so with caution.

Another caution to interested parties: thus far I have found the documentation for VPC 2007 scanty and often not very informative. If you find yourself with deeper questions about how to make the software work, you will have to use Google as your manual.

So far, I am impressed with Virtual PC 2007, but as with most Microsoft products, first impressions can be deceiving. I give VPC 2007 a Good But Not Great (3.5 out of 5) First Look rating.

This entry was posted in Computers, First Look, Reviews, Science and Technology and tagged microsoft, virtualization. Bookmark the permalink.