On a planet far, far away

Posted on 14 November 2008 by dlhitzeman

Science item of the day

UC Berkeley researchers using the Hubble Space Telescope have produced what may be the first image of a planet outside our solar system. The amazing picture shows a several Jupiter mass planet against a debris field around the star Formalhaut. 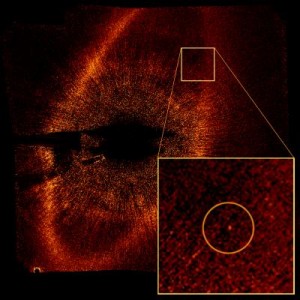 The incredible image brings up yet another reason why the Hubble Space Telescope needs to be maintained until it can be replaced. Unfortunately, there are no plans I am aware of to replace the telescope with a more modern version, and the only spacecraft capable of servicing the telescope, the Space Shuttle, is going to be retired without a direct replacement.

It is unfortunate that programs like Hubble, the shuttle, and others will not be replaced. Curiosity is a human hallmark, and these programs have allowed mankind to extend its knowledge of its universe. We have no idea what kind of knowledge these kinds of programs might bring us, but not having them guarantees we will never know.

This entry was posted in Astronomy, Science and Technology, Space and tagged Curiosity, Hubble, Planets, Space. Bookmark the permalink.