A better way to shave

Posted on 4 January 2010 by dlhitzeman

No, this isn’t a commercial; it’s a real, field tested by me, way to save yourself some money by throwing away fewer razor blades if that’s how you shave. 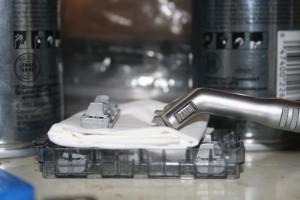 About this time last year, I put a new blade on my razor, and I just replaced that blade today for the first time in a year. This is not some kind of a gimmick, just some sound science and changing the way I thought about razor blades.

I first found out about how to do this while listening to Clark Howard. He had a guest who is a metallurgist who explained that the thing that makes razor blades go dull is the corrosion caused by constant exposure to water, salts from your skin and shaving cream, and oils from your skin. His explanation made a lot of sense to me, so I decided to test his claims myself.

I first started this experiment around March of 2007. I replaced my blade with a new one and simply carefully rinsed it and dried it with a hand towel. That blade lasted until August of 2007, and its replacement was not replaced until January of 2008.

In 2008, I added an extra feature to my test, now storing the blade face down on a tissue to wick away any residual moisture left from my drying process. I believe that blade would have lasted an entire year except for the part where I  dropped it and ended up having to replace the blade and the handle due to damage.

I started with a new blade the first time I shaved in 2009, and that blade lasted until 4 January 2010. In fact, that blade still has quite a few shaves left in it, but I wanted to add a new element to my test, being a count of the number of times I shave with the new blade until it cannot be used.

Granted, I do not shave every day–usually twice a week and usually not more than four–but even at twice a week, that is 104 shaves in a calendar year, or 14 weeks for someone who shaves everyday. For someone replacing a blade every week, that change in replacement could add up to hundreds of dollars a year depending on the kind of blades one uses.

I will report back on this test as it progresses.