Posted on 3 January 2010 by dlhitzeman

The best defense is self defense. 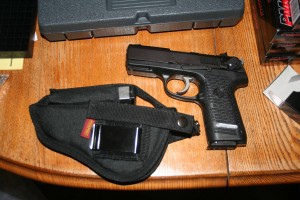 According to various agencies that track such statistics, the average response time for a police department to a violent crime in progress is about ten minutes. Response times range from two or three minutes up to as long as a half an hour for people who live in rural areas of low population states.

That amount of time can be an eternity for someone suffering a crime. In that time, criminals can take lives, violate persons, and take property, and the likelihood is that no one will stop them because the police will not arrive in time.

No one will stop them, that is, unless people stop them themselves.

This state of affairs is not the fault of the police or governments. Frankly, it would be impossible, even with the best of intentions, for law enforcement agencies to provide the kind of protection that prevents all crime.

Instead, the problem lies with a societal norm that considers self-defense to be itself criminal. Too many people are afraid to allow other to use violence and force to defend themselves because they equate violence and force with criminals and the police.

In the mean time, everyone is at risk as long as people continue to place the responsibility for their well-being in the hands of people that are many minutes away at best. As long as criminals know that the victims cannot defend themselves and that the police probably will not get there in time to stop them, there will be no incentive for the criminals to stop.

Yes, in a way, advocating self-defense is advocating its own kind of violence, but it is a violence with its own kind of equilibrium. Once criminals realize that crime has the potential of a very high cost, only the most dedicated and violent criminals will continue to commit crime. Historically, this latter kind of criminal has a very short lifespan.

So, think about how you are protecting yourself and your family right now. Are you going to hope that the police arrive before something bad happens, or are you going to take care of the problem yourself?