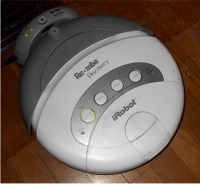 No, Iâ€™m not just repeating the commercial, I actually really do have a, perhaps unhealthy, infatuation with robots, and the iRobot Roomba Discovery for Pets furthers that tendency.

I bought the Roomba for two basic reasons. First, we have three cats at home, which cats produce a fourth cat among them in shed hair. Second, my wife hates sweeping, and we have three cats. For me, a robotic vacuum was a slam-dunk idea.

What Comes in the Box 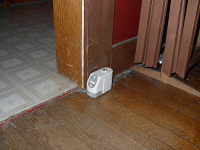 The basic iRobot Roomba Discovery for Pets kit comes with the aforementioned robotic vacuum, a self-docking Home Base charging station, two Virtual Walls, and an accessory kit with various tools and extra parts.

After charging the Roomba upon receiving it, I hit the â€˜cleanâ€™ button, and away it went. It did exactly what it was supposed to do the first time, sweeping 2/3rds of the 1st floor area of my house before the battery died, hence the need for the Virtual Walls. 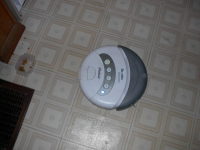 In regular employment, weâ€™ve divided the first floor into three areas using the Virtual Walls and use the Roomba three to four times a week to sweep those areas. It completes its task in about an hour to two, and when in the room with the docking station, typically successfully docks about 2/3rds of the time.

The only problems the Roomba seems to have in my house is sometimes getting wedged under my couch and getting trapped under rocking chair legs. The couch thing just has to be dealt with, but the rocking chair trap is fixed by simply moving that chair when sweeping that room. Rarely, the Roomba also thinks it has â€˜fallenâ€™ over floor vents. 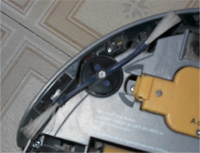 Cleaning the Roomba is fairly simple. The exterior of the robot can be cleaned with a damp cloth. We typically empty the dustbin every couple of times we use the robot as well as cleaning the filter. Also periodically, the brush has to be cleaned, which is done effectively with the provided brush-cleaning tool.

To date, the only maintenance I have performed on the Roomba is to remove the hair from the axle of the edge brush.

What I Would Have Done Differently

I really do not have any significant complaints about the Roomba, so I will nitpick here about things I would add to the next generation Roomba.

I think the next generation should include the ability to map and adapt to the environment being vacuumed. Granted that memory could be a problem, add to the Roomba some sort of flash memory device to store map and adaptation information for each room.

I would also add to the next generation Roomba better â€˜anti-stuckâ€™ sensors, specifically making the front bump sensor â€˜three dimensionalâ€™ to prevent the robot from becoming wedged under things like couches.

Finally, I would make the, â€˜escape the rug trapâ€™ capability more sophisticated by adding some sort of â€˜get unstuckâ€™ lifter to the robot.

I have to admit I was biased toward the iRobot Roomba Discovery for Pets from the first moment I realized it existed, however the robot did not disappoint and performed mostly as advertised, making it worth the expense.

I give the iRobot Roomba Discovery for Pets a rating of 4 out of 5.

This entry was posted in First Look, Robotics, Science and Technology. Bookmark the permalink.