Posted on 7 December 2010 by dlhitzeman 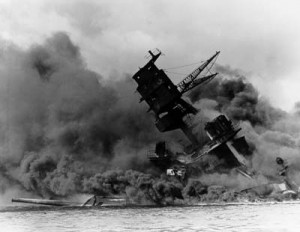 The Japanese attack on Pearl Harbor culminated a decades long escalation in tensions between the United States and Japan, and the event forcibly thrust the US into World War II.

Yet, all of those statistics hardly hint at the real, world changing costs caused by a war that was, as most wars are, preventable. This observation in no way diminishes the sacrifice of those who died that day, nor does it diminish the horror of the attack, yet if remembering such events of history is about understanding them so as to prevent them from happening again, then such observations must be made.

Otherwise, the sacrifice that day caused will have been in vain, and the costs will be that much higher when the next event occurs.